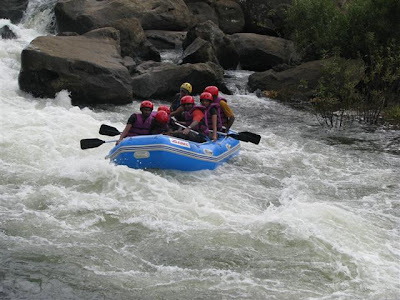 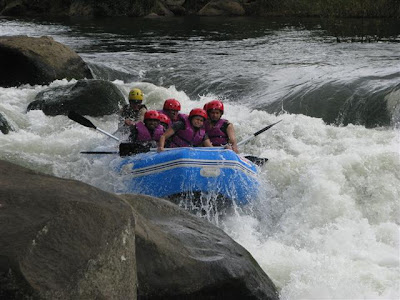 It was early August and monsoon was in full swing. The landscape was covered in lush green with a veil of thick mist descending from the mountains and dew drops formed on flowers as they bloomed. As the rain danced on the windshield, I hummed to soulful melodies by Jack Johnson en route to Prithvi’s Homestay in Madikeri.

Feeling refreshed in dry clothes after a brief dance in the rain, I replenished my energy vault with a cup of local filter coffee and a plate of idlis (steamed rice cakes), courtesy of my kind hosts. Out of sheer curiosity about a river rafting experience down south—since it’s synonymous with northern India—this was the first thing on my agenda. So I packed my gear—a towel, change of clothes, floaters, shorts and a headband—and set out for Dubare, the starting point.

Starting out
The first thing you do before getting on the raft is sign a form taking full responsibility for your actions, but don’t be afraid. The only thing it states is that if you topple over the raft, bang into a rock or drown, it’s entirely your risk; see, nothing to worry about! It seemed straight out of a courtroom drama, where you swear on the holy Bhagwad Geeta that you shall speak the truth, and nothing but the truth. Well, an encouraging start eh? Luckily the adrenaline rush seeking adventure took over my wobbly thoughts and I headed towards the raft with two other people. Once we were seated in our raft, our river scout imparted safety tips and guidelines to follow. And thus began my tryst with the Cauvery River.

We all settled in our respective positions: me in the front with another person, and a middle-aged couple behind us. Our beginning was slow and serene. The tiny bit of fear inside me had completely vanished, now I thought, “It was so silly to worry; this is so simple, not like I’m in the water!” Just then, as if someone were reading my thoughts, our guide smirked, “You all need to take a dip in the water so that you get a feel of it.” And one by one, each of us were neck down in the freezing river. I must admit, it felt pretty good…of course, we had our life jackets on.

The key to river rafting is balance. It’s a challenge to balance your body in an inflated raft on a turbulent river and manage to propel yourself further by rowing. So as we found our minds drifting away absorbed in the plethoric landscape, our guide brought us back to reality with his excited shriek, “Hold on!”, indicating an upcoming rapid. The first rapid rose three metres in the air engulfing our raft with chilling water as it descended.

The thrill was so great that even the freezing cold water that splashed on our faces seemed invigorating. Suddenly, the excitement rushed through my body like a current. I couldn’t wait to experience the next rapid. Our arms were already tired and we were soaking wet and the sun was our only respite. As the river had simmered down, we tried to get our raft back on track after losing our direction whilst battling the rapid. The next rapid approached and got us back to our oars after a few minutes of rest. It proved to be higher and even more stimulating than before. Before the next mighty rapid a stopover for a steaming hot cup of Coorg’s local coffee was just the need of the hour.

The two hours that we rode on the endless Cauvery was too little for me. I had never experienced an adventure like this before. At the end of our journey, the five of us on the raft had become rather friendly. So, while bidding each other goodbye, the kind middle-aged gentleman let out a little observation. Laughingly, he said, “When we sat in our raft, did you guys see the board that read: Beware of crocodiles?” Stunned, we all looked at each other, but within a few seconds we burst out laughing too. If he had blurted this out before we began, we would have probably missed the thrill of a lifetime!

Accommodation
If in Madikeri, do stay at Prithvi’s Homestay. It is comfortable, clean, very reasonable and the view is outstanding. You can even rent a car at the homestay. For more information on accommodation, contact Mr Nanda from the Nisarga Tourism and Trekking Information Center on (08272) 229806 or email: nisargatourism@yahoo.co.in 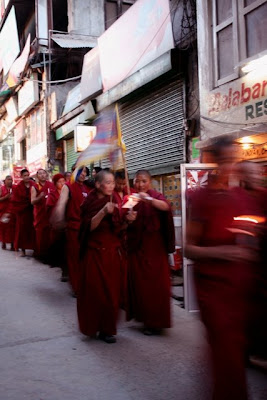 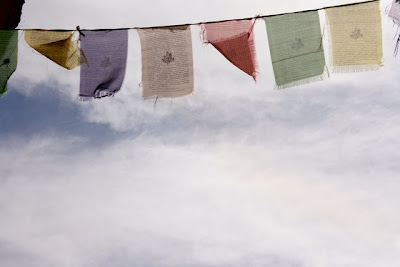 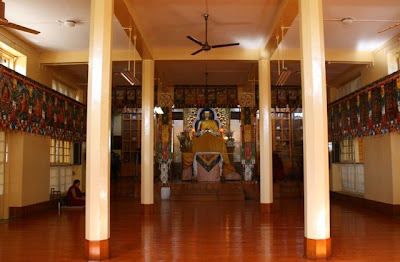 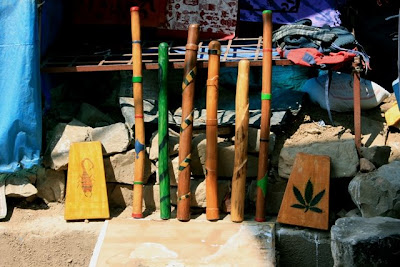 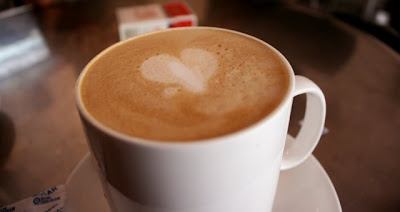 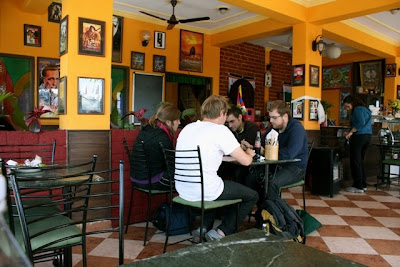 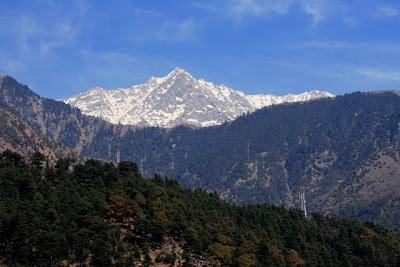 If there’s something I have learnt as a traveller, it’s this: Never judge a place at night-time. I arrived at Mcleodganj a few hours after sunset, so my first impression led me to think of it as a small, cramped place owing to the very narrow lanes covered with buildings and people alike. To top that most hotels were packed and finding a room was getting increasingly difficult after trying the fifth one! Come morning and it was almost as though I was in another place altogether. I went to the balcony of my room to feel the cool breeze when my eyes chose to widen and my jaw unwillingly dropped. Let me explain. When people like me who’ve lived a city life for eternity witness a phenomenon called mountains, this I believe is a normal side-effect. But this was no ordinary mountain range. In the midst of two regular peaks was one innocent milky white snow-covered peak rising high up to touch the sky and look down at us mere mortals. This awestruck behaviour continued for a good one hour after which the great Indian belly began to complain about avoidance.

Imbibe the spirit
Often it has been said that a destination can be judged by the people that reside in it. The locals here were not only cheerful and friendly, but also passionate and united for their cause (freedom of Tibet). The undying spirit of the people in spreading awareness about their cause and their continuous struggle for freedom is applaudable. The Tsuglagkhang Complex (located at the end of the Temple Road) that contains the Dalai Lama's residence, a monastery, temple and museum is testament to this unity. Steeped in Tibetan culture, every corner of this complex is resonant with depictions of Tibet’s history and its struggle for freedom. A tall shiny gold statue of Sakyamuni Buddha resides calmly in the heart of the temple surrounded by pillars adorning colourful thangkas with prayer wheels on the outside. The complex also houses a café and bookshop for visitors.


Food bazaar
Momos are a Tibetan speciality, but not everyone gets them right. Snow Lion Restaurant, located at Jogibara Road, opposite the temple, serves some of the best momos in town, among a host of other Tibetan specialties. Try the steamed momos with either a vegetable or chicken filling, you won’t be disappointed. While here, also try the banana and chocolate crepe or ask for a slice of the chocolate cake, not only is it delicious, but the portion they serve is very generous! If Tibetan cuisine doesn’t appease your taste buds, head to Jimmy’s Italian Kitchen, located adjacent to Snow Lion, and sample their Medallion Chicken, various kinds of pastas or the fried bacon strips they serve with breakfast. Along with lip-smacking food, this restaurant has a warm ambiance with film posters sprawled on their chrome coloured walls. This is the best place to enjoy an outdoor breakfast as they open their rooftop space in the morning, where you can view the snowy Dhauladhar mountains. Ashok Restaurant, located down Jogibara Road of the main street also has a good rooftop view and serves tasty Indian food.


Coffee haven
Mcleodganj is a coffee lover’s paradise. It’s replete with coffee shops, most of which offer indoor and outdoor settings and serve good quality coffee and numerous accompaniments. Moonpeak Espresso and Mandala lie on the Temple Road, whereas Coffee Talk is close to the Tsuglagkhang complex, and First Cup Café is located en route from Dharamsala to Mcleodganj. But what delights coffee lover the most is the large quantity of coffee (and even some desserts) they serve. Most of the coffee shops here use big mugs, just like the ones made popular on the television sitcom Friends. It gets better. The prices attached to these big mugs are very small. On an average, you can get a big mug of regular coffee for Rs. 40. Some of these cafes even have a significant collection of books that customers can read while enjoying their coffee.


Shopping
If you enjoy street shopping, the market displays some of the best jewellery replete with exotic gems and stones. But there’s a catch, the shopkeepers certainly don’t bargain. However, don’t be too disappointed, as there are a couple of shops that offer reasonable rates on curios, junk jewellery and clothes. You can also pick up souvenirs such as Tibetan thangkas, prayer flags, varieties of tea, T-shirts adorning the Tibetan flag, wall hangings, statues of Lord Buddha, carpets and curios.

McLeodganj isn’t a touristy place, but if you’re hoping to find yourself in a place that is cosy, content and lively, then it doesn’t get better than this.
Posted by Ruchika Vyas at 17:38 No comments: