This April I finally set foot in Europe thanks to a work assignment. India and Switzerland have a deep connect thanks to the numerous Bollywood films that have featured this spectacular destination. Swiss chalets, Swiss cheese and Swiss chocolate, do you really need more reasons to visit Switzerland? Here's the first article from the Swiss series that I penned for iDiva, The Times of India.

One fine day...
It all started when I found a €20 cents in my wallet one fine day. I had no idea where and how it came into my wallet, but I knew it was a sign...my Euro trip was in the making. And sure enough, two weeks later, I was on my way to Switzerland. After an unusually smooth landing at Zurich airport, I headed straight to the station to catch a train to Spiez. The Interstate Railways proved to be a must-see sight in itself. Comfy interiors, clean toilets, adequate luggage space and a restaurant and bar aboard this double-decker train had me instantly thinking of the numerous movie sequences shot aboard such trains, like The Tourist or our very own Hum Tum. So I got myself a cup of coffee and immersed into the view outside that curiously transformed from open fields and calm lakes to graffiti-splashed walls and impressive glass buildings. Spiez arrived in less than two hours. The station is surrounded by imposing snow-flecked mountains on one side and the serene Lake Thun. En route to Interlaken, a flurry of chalets instantly caught my attention. With the typical slanting roof, most of these chalets were adorned with cow bells in different sizes and had little courtyards where children were playing around. A life so ordinary and yet so coveted. 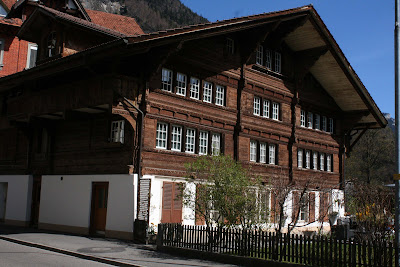 I made it to the hotel, the Victoria-Jungfrau Grand Hotel & Spa, after a quick 20-minute ride. This 140-year-old hotel effectively combines old-world charm with contemporary luxurious amenities. Its exquisite architectural structure, friendly staff and prompt service impressed me within minutes of my arrival. My room key came with a personalised booklet filled with hotel information, whereas my luggage had reached my room well before me. In addition, my room held a breathtaking view of the Jungfrau Mountain peak, for which the hotel even provided a pair of binoculars to get a closer view. It was truly luxury at its best. 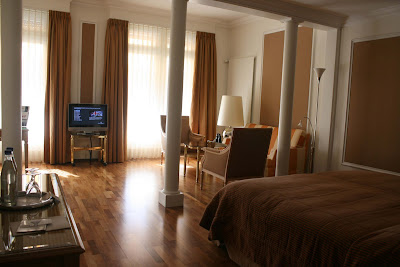 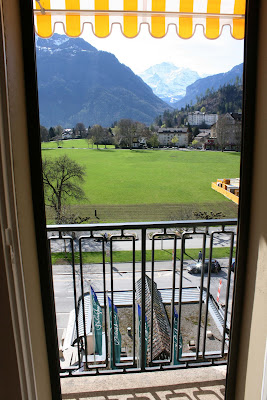 The view from my room

Exploring the city
The cool and inviting weather urged me to head out and explore the town on foot. The visual imagery largely comprised wooden chalets with French windows decorated with colourful flowers around the porch and ceramic roosters (sometimes ducks) sitting by the window ledges. I was particularly fascinated with the eloquent restaurants and pubs here, many with al fresco seating. After walking along the Höheweg, I dropped into Tchibo, a local cafe, for a cup of coffee. A refreshing cappuccino and chocolate donut later, I explored the many coffees offered by the brand and selected the Espresso Gold to take back home. However, it was Swiss chocolaterie Schuh that truly wooed me with a chocolate show they were hosting that very evening. Combining an exotic chocolate display and chocolate-making demonstrations for enthusiastic learners (like me) with a mouth-watering chocolate voucher as an add-on, the show cost a mere CHF 14.80. With a promise to return later in the evening, I set out to do some shopping. 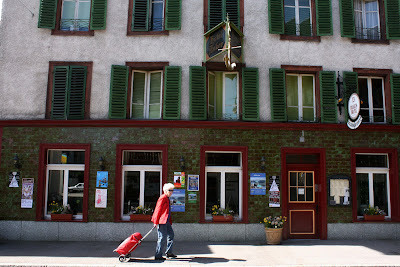 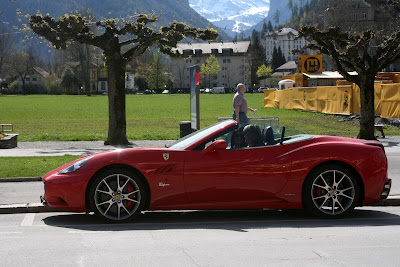 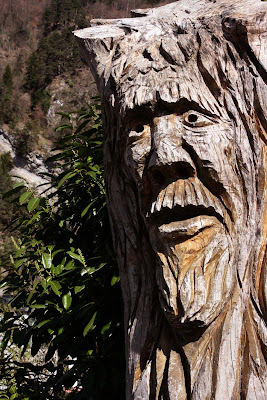 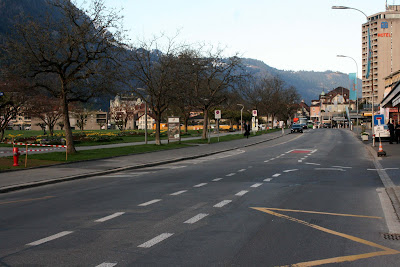 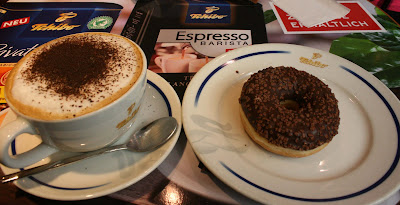 Coffee and donut at Tchibo 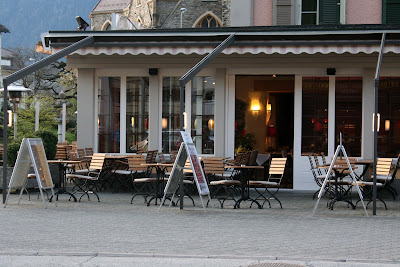 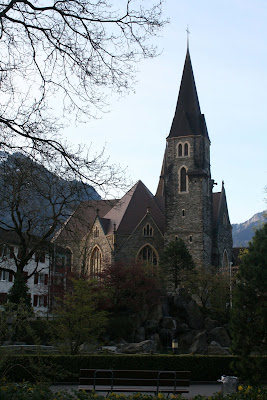 I managed to grab a pair of gorgeous suede boots for a steal and a bagful of souvenirs to take back home. Once back at the hotel, I freshened up and decided to head out to catch the chocolate show that was due to start in an hour. However, unfortunately, Murphy’s Law intervened and it was cancelled due to lack of sufficient registrations. The glorious day ended with some finger-licking cheese risotto, margarita pizza and red wine at Rafmi Pizzeria, followed by beer samplings whilst listening to retro German tunes at a local bar called Johnnie’s. 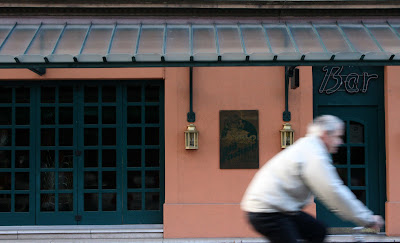 Most often, when people travel they hope to see wondrous sights, but Interlaken showed me much more. This little cheery town resonates with peace and quiet. Here, you’ll find more cycles than cars, impeccably clean streets, organised pavements and a disciplined traffic scene. But most of all, happy and content people.

Fact file
By air: The nearest airports are at Zurich and Geneva.

By road: A well maintained highway and ‘Autobahn’ route connects Interlaken with airports at Zurich and Geneva as well as most large cities in Switzerland and Europe. ‘Autobahns’ require a toll sticker. The toll sticker is available at the border or gas stations and post offices within Switzerland. The annual fee is CHF 40.

When it comes to desserts, who wouldn’t offer their taste buds for a slice of experimentation? I know I would. Be it soft, lightly crunchy macaroons, a dessert pizza or intoxicating liqueur and liquor-based desserts, I was stumped for choice! So, I tried them all :)
(okay, not all, a few; but I still got you all loads of fun options to try out). 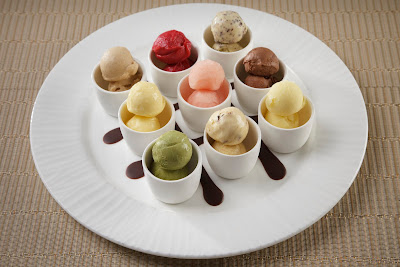 Dessert pizza
For the unique dessert pizza, head to JW Marriott, Juhu. If you’re a pizza lover, you’re going to love this. Created by the supremely talented and adorable Chef Oriana, this pizza dessert is spectacular! In her own words, Chef Oriana passionately explains, “I make it like my baby, and I cannot bear it being wasted!” With the base as a thin crust, she layers it with finger-licking mascarpone cream, a variety of fruits, slivers of chocolate and many more yummy ingredients, making sure that you eat every little bite of it. 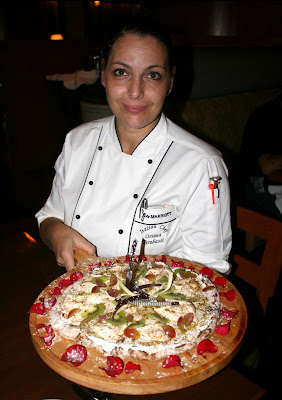 Macaroon magic
Lately, I’ve been craving macaroons all too often; especially since I read about these kooky chilli and wasabi-flavoured macaroons. Admittingly, I was apprehensive and simultaneously excited to try these unusual flavours owing to the sheer creativity of it. So, I headed to Le15 Pâtisserie, tucked inside a nondescript tiny space in a by-lane of Worli that would have been easily missed had I not been looking for it. Ironically, it had been there for a year!

Since I reached half an hour before closing time, I could only sample their chilli and pan flavours. The chilli macaroon, decidedly green in colour, was perfectly spiked with a hint of chilli; enough for me to taste it, and not overpowering enough to sting my taste buds. It was just right. And the macaroon was light as cotton, with a slight crunchiness...I truly appreciate such perfection. The pan flavour, though not something that my taste buds enjoyed, too was bang on. With a pink-coloured macaroon on top and green on the bottom, the play of colours wasn’t lost on me. I also tried their passion fruit, which was simply yummy with a slightly sweet and tingly taste. Ditto for their bitter chocolate and hazelnut flavours. 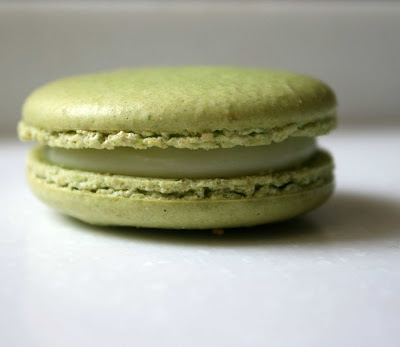 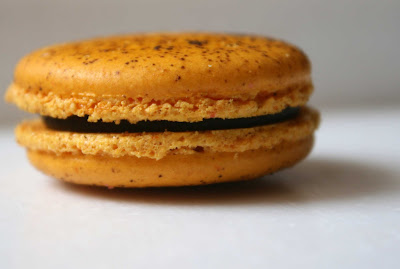 
You can also try macaroons at Theobroma, they have a decent range of flavours like chocolate, strawberry and pistachio. However, I found their macaroons weren’t as light as the ones from Le15 Pâtisserie. Still, I would definitely recommend them for their flavour and crunchiness.

I even got you a recipe to try at home. So knock yourself out (but don’t pass out!)

Method:
1. Combine the egg yolks and vanilla.
2. Place the milk and cream into a sauce pan and bring to the boil.
3. Pour the hot cream onto the egg yolks and put back onto the heat until it becomes thick.
4. Remove the vanilla bean and allow the mixture to cool.
5. Add the Kahlua and start to churn in an ice cream machine.
6. Half way through the churning, crumble in the Amaretti biscuits.

Posted by Ruchika Vyas at 02:24 No comments:

Brunch is a perfect way to start any Sunday morning. It not only refreshes you, it is also good motivation to wake up. Especially for supremely lazy people like me! So, one fine Sunday, I visited The Leela for a hefty brunch at their Citrus restaurant. Eggs, waffles, pancakes, pizza and pasta, all this and so much more, I couldn’t wait! I reached there at 1:30pm and was pleasantly surprised to find an unending spread of delicious treats. The expansive range included a Japanese seafood counter that comprised an assortment of prawns, lobster, mussels and a sushi platter; live stations that featured salmon, shrimp-vegetable cocktail, a grill and BBQ station that included vegetables, chicken breast, corn on the cob, sausages, lamb steak and Cajun beef steak, as well a shawarma station; an Indian spread with moong dal pulao, kadhai gobi, paneer kali mirch shaahi and masala fried fish; and so much more that I simply couldn’t resist the urge to get started.

The spread...
I began my culinary experience with some Aragula and feta Greek salad and a glass of red wine. Since the brunch includes made-to-order pizzas and pastas, I ordered a mixed vegetarian pizza. I moved on to take a look at the various display counters embellished beautifully with elements like colourful macaroons in tall jars, a variety of cheeses with tiny flags masquerading as name tags and a carved-out bread display. I sampled the tiny Thai coconut rice pudding and dipped a strawberry in the chocolate fountain while I surveyed the spread. I settled for a mix of some corn fritters, pancakes and a corn quiche as appetisers. I really like Thai curry so I was glad to find it as part of the spread. 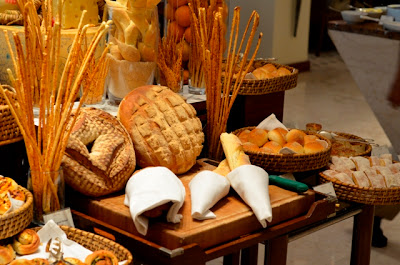 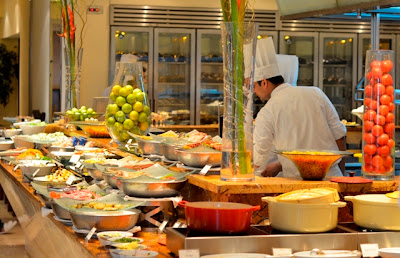 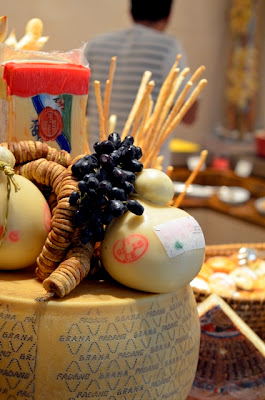 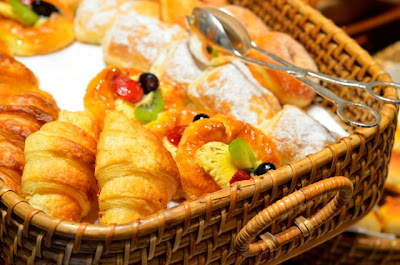 The dessert counter
When it came to desserts, I was spoilt for choice. I didn’t know how to choose between the creatively-designed black forest, the innovative chocolate mousse with cinnamon apple compote, the milk chocolate berry yoghurt pastry, the chocolate banana walnut sponge cake or the orange sugar-free panacotta! I settled for the black forest and chocolate banana walnut sponge cake, and I couldn’t be more thrilled. They were finger-licking good! And what proved to be a great addition was the retro music that was playing in the background. It was simply perfect; a Sunday like no other. 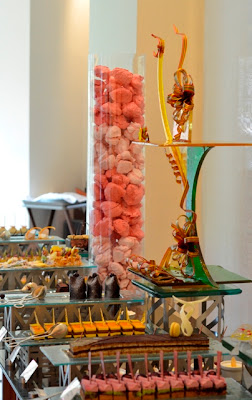 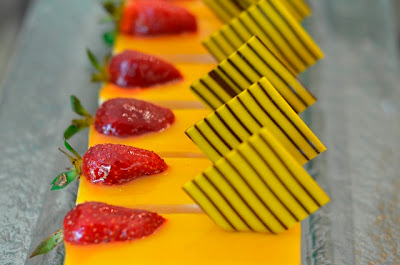 What made my experience memorable was my meeting with Chefs Birender and Rashna, the Sous Chef and Pastry Chef respectively. Their passion for food was clearly reflected in their enthusiasm as they told me about the various dishes and concoctions. I love food and I bake quite often, but after my experience at the Leela, I’m certainly more interested in eating! So much for food for thought, eh?

All photographs by RAVI BOHRA

A quick review of a cute little chocolaterie in Bandra for all those crazy chocolate fans out there, like me!

Why: For the love of all things chocolate!

What: If your greed for chocolate delights isn’t enough incite you to visit this brand new chocolateria from down under, its inviting comfortable brown chairs and colourful Spanish mosaic tiles that adorn the walls are sure to do the trick. Warm orange and brown exteriors welcome you at the newly opened Chocolateria San Churros in Bandra. It is spread over two levels that can fit in easily over 50-60 people. The menu is splattered with some usual and some unusual suspects, namely classic hot chocolate, freshly made churros dipped in melted chocolate, seasonal fruits with chocolate fondue and platter-fuls of treats drenched in chocolate such as chocolate-coated pretzels, chocolate brownies and sundaes. Coffee, tea, fruity milkshakes and sandwiches are available to prevent a chocolate overdose. 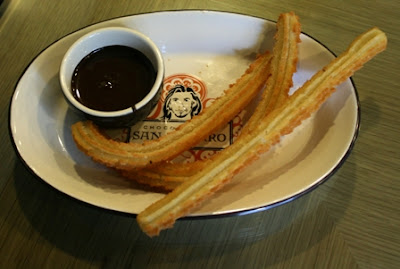 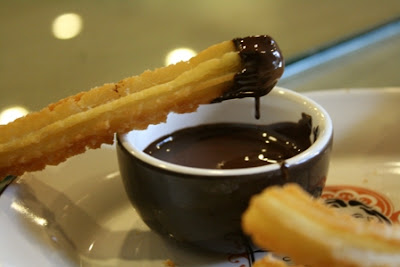 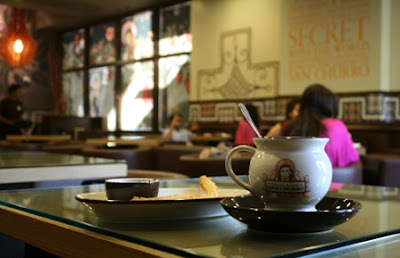 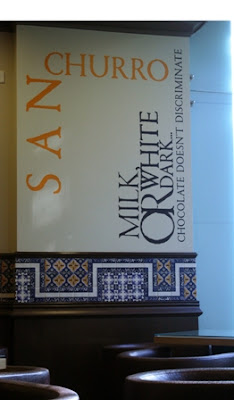 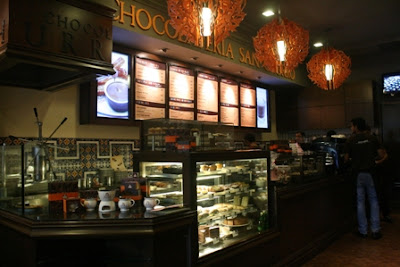 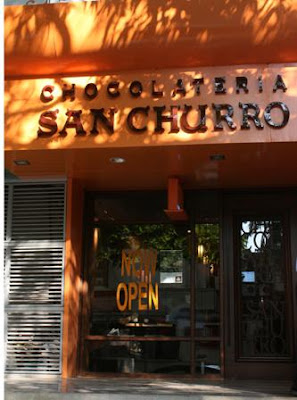