Ever wondered what life would be without technology? Here's what I discovered...


Giving up technology and living life as in medieval times sounds exciting in theory, but would it be that much fun? Maybe the elaborate vintage costumes would amuse you for a while, but then what? Go to war as the Mughals did? Let’s face it. Most people in those times went to war out of sheer boredom. I mean, they didn’t exactly have fun activities to indulge in, except maybe the ones that include reproduction. Let’s be honest: if they had the Xbox 360, they’d probably cosy up indoors and play Mortal Kombat or Halo. There would be no bloodshed, no one would have to die, they’d save a lot of money on the heavy artillery needed for war and the women would get more leisure time for their milk and rose-petal-soaked bath. 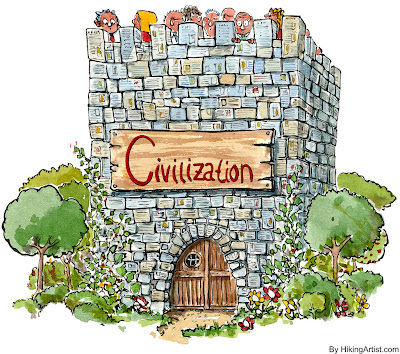 Giving in to curiosity, I took it upon myself to discover what life would be like without technology. What would happen if I didn’t check my emails for a week? Would my plants in Farmville survive if I didn’t water them? Will readers stop following my blog if I didn’t update it for a few days? Would I be haunted by the hundreds of text messages that would pour in while I’m off the grid? Most of you are probably already shuddering at the mere thought! But play along, because I did give it all up—well, for a week anyway.

On Day 1 of my tech-less life, I woke up at 1p.m.; so much for switching off the alarm. I now wondered why I was awake at all, considering I could no longer use my cell phone, computer, TV, radio, MP3 player, refrigerator, microwave or geyser. Well, I decided I might as well make the best out of this kind gift. So I went back to sleep.

After my second awakening, the wondrous vision of meditation came to mind. So I began to focus on attaining peace and nirvana. No less than five minutes went by and my evil twin, restlessness, took over; breaking my already weak connection with the almighty. My twitching fingers—obviously withdrawal symptoms from a lack of texting and typing—needed something to do. So I took up knitting; the good thing is I now have a back-up career.

Day 2 saw me head to work, which was pointless, really. With no computer, I had to write my articles on paper, all the while praying that my shoddy handwriting would be understood. I was flooded by disgustedly shocked looks from every passerby; my purpose of being at work was becoming a frequently asked question. Someone sarcastically even suggested I make a placard stating my reasons. Not being able to text, tweet or blog, I knitted my grievances.

Days 3, 4, 5, 6 and 7 were almost the same: Sleep, read, eat, drink, and sleep. The nights proved more interesting. I was either being eaten by giant evil cellphones, or being sucked into vast computers in a whirlpool. Some even took dramatic twists like this one: Fed up of living a replica of Fred Flintstone’s life, one fine day I return to the real world only to find my Second Life avatar had replaced me. In fact, she was a better, new and improved me, with 800 new friend invites on Facebook, 999 new followers on Twitter and an inbox flooded with praises and compliments. Pop! Back to reality.

Turns out, life today is incomplete without the incessant BBM-ing, SMS-ing, obsessive tweeting and frequent attempts at beautifying our Facebook farms.

Hi,
While browsing I went through your blog and found it something different and I was paused to think for a while that seriously what would be the life of the people without technology? Then by just saying to myself “No…Life is not possible”, I just move on. People are so acquainted with all the modern technologies that it is very difficult to think of the life without it. Looking for a post regarding whether this improve technology is useful or harmful?
Orimark

It definitely would be very difficult to live life without technology, but it is something we have to live with. We simply need to disconnect every now and then to be able to connect with 'real' life :)