An armchair tour of Jungfraujoch

If in Switzerland, don’t leave without a visit to Jungfraujoch, The Top of Europe. Join me on an armchair tour to Jungfraujoch via a spectacular ride aboard the historic Jungfrau rail.


It began with a leisurely stroll along the Bahnhofstrasse, on the eastern side of the Höheweg in Interlaken. I immensely relished my morning coffee from Tchibo on a warm, sunny day. But the intimate moment with my coffee was short-lived as I had to dash to Interlaken Ost Station with 10 minutes left to catch the train to Kleine Scheidegg. Without a dramatic Dilwale Dulhania Le Jayenge train moment, I comfortably found my seat. Almost instantly, my camera-wielding hand got into action and began capturing the scenic splendour Switzerland is known for. Verdant meadows, quaint wooden chalets and meandering streams, all flanked by magnanimous mountains and lush foliage, filled much of my pictorial frames. As the train chugged along, the landscapes transformed into a series of thick, white blankets laid upon jagged mountain peaks. Soon, I spotted bright orange ski lifts, whose cheery riders began waving down at me. The Jungfrau region truly is a skier’s delight. 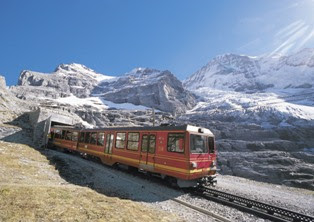 The Top of Europe
We made a stopover at Kleine Scheidegg to hop onto the cogwheel rail that would take me to Jungfraujoch. Curiously, the Jungfraujoch, at 3454m, is Europe’s highest-altitude railway station in a world of rock, ice and snow. The 50-minute train ride comprised nine kilometres, climbing a height difference of 1,400m. For seven of the nine kilometres, we passed through a tunnel hewn in the Eiger and Mönch rock. The train stops for five minutes at both the intermediate stations, the Eigerwand (Eiger Wall) and Eismeer (Sea of Ice), where we got the opportunity to step out and marvel at the fascinating snow-clad mountain range through large windows. What particularly impressed me were the presence of clean washrooms and drinking water at each of the stops, in spite of the incredulous altitude they were located at. 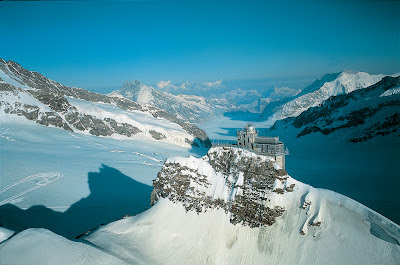 As we approached Jungfraujoch, the temperature began to drop; calling for gloves and mufflers that were eventually not warm enough. Once at Jungfraujoch, I headed off to see the Ice Palace. Created in 1934 by two mountain guides from Wengen and Grindelwald, the Ice Palace extends over nearly 1,000sqm and is located some 20m below the Aletsch Glacier. Completely carved out of natural ice, the hall comprises a vaulted ceiling, imposing pillars and superb sculptures of wildlife and other exhibits, all shimmering in a light transparent blue. There is even an Ice Bar adjoining the palace, where we sampled the locally-brewed single malt whiskey. Next, we walked up to the Sphinx vantage terrace, where the Aletsch glacier lies directly at your feet. At 22km, this is the longest ice stream in the Alps and it is also part of the UNESCO World Heritage Swiss Alps Jungfrau-Aletsch. I was told, in clear weather, views from the Sphinx extend to the neighbouring countries of France, Germany and Italy. I, unfortunately, wasn’t so lucky. 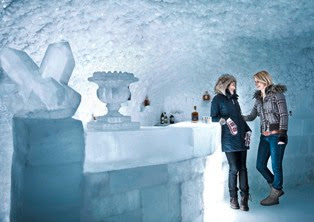 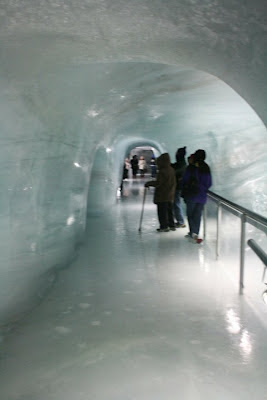 Chocolate and cheese
It was time to satiate my increasingly impatient appetite at the Crystal Restaurant. Surrounded by snow on the outside, I was seated in the cosy warmth of the cute little restaurant with red and white interiors. In a bid to utilise this opportunity to try Swiss favourites, I ordered the hugely popular cheese fondue, rösti (a Swiss dish made with roughly grated potato, either cooked or raw, sautéed on both sides until crisp and browned) and a medley of chocolate mousses (dark, milk and white variants) set on a beautifully decorated plate. After an immensely satisfying meal, I sat back and enjoyed the view over an aromatic espresso. 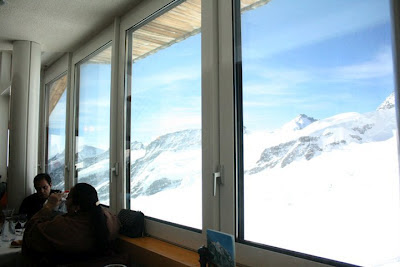 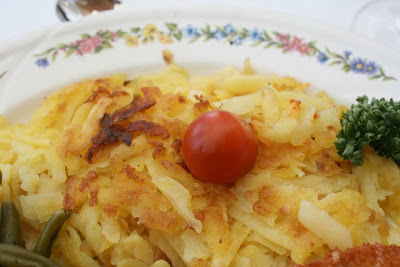 It was so warm and cosy to stay indoors in the restaurant, as the cold was too harsh to bear; especially since I attempted to walk on the terrace of the building. Slipping and plonking on the snow seems like a lot of fun, but in reality I was freezing like crazy hell and my fingers were just numb! After spending an hour here, I just had to head back to Interlaken and soak in the sun. I may have felt like a frozen popsicle, but it was totally worth the trip!

Grindelwald First
First is the brand new excursion introduced very in 2003, travelling in a modern cable car from Grindelwald to First. This excursion is a special experience that includes beautiful botanical, flower and wildlife trails as well as Lake Bachalpsee, a glorious Alpine gem.
z 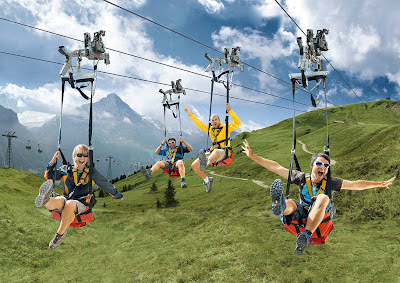 Trotti biking: The trendiest means of transport. Pick a scooter bike from Bort and travel downhill for a thrilling scooter run experience.

Paragliding: Enjoy a paragliding experience along with the company of an experienced pilot and swoop through the majestic world of mountains and glaciers.


Harder Kulm
Harder Kulm, Interlaken's ‘own mountain’, by the red funicular takes only ten minutes to reach. Take a journey by the funicular in the most modern panorama carriages. It offers superb scenic sights of mountains, lakes and valleys; a glorious garden terrace; a restaurant; a wildlife park and children's park. 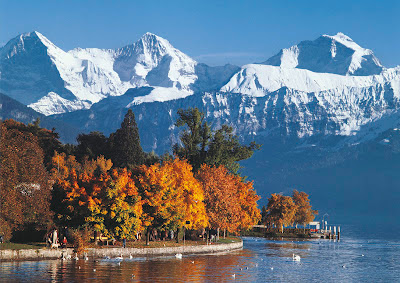 Please note: Most of the photographs here are sent from Switzerland and Jungfraujoch Tourism