Two years ago, I made a wish list of all the things I wanted for my birthday and sent it out to my close friends. The list went from places I wanted to visit to things I wanted to acquire. I just happened to find this list about a week ago and couldn’t stop laughing at some of the ridiculous requests I’d made. For instance, I wanted to meet the new Star Trek’s Spock Zachary Quinto. Among the rest, there was the desire to visit Europe and USA, as well as Ladakh and Srinagar in India.

And now, I’m pleasantly shocked to say that I actually managed to fulfil several of those supposedly ridiculous wishes. I made it to Srinagar and Ladakh on the same trip, I finally made a foray into Europe with a work trip to Switzerland only to follow it up with a solo trip to Paris, Amsterdam and Brussels, I then headed to the US for two months, and most shocking of all, I attended the Golden Globes. I’m STILL in disbelief. To all those who believe that the law of attraction doesn’t work, here’s proof it does!

And so, in the hope that it will continue to work, here’s my birthday bucket list for 2013:

Feel free to share your lists too!
Posted by Ruchika Vyas at 17:25 5 comments:

TRAVEL TIDBITS: A new wing added to the Louvre

Adding another string of masterpieces to their already vast collection, the Louvre museum in Paris opened a new wing dedicated to Islamic Art. The museum was already home to several pieces of art, from the Islamic world, only now, it has its own wing. Spanning over 3,000 works from the 7th to 18th centuries, some being displayed for the first time, the wing is sprawled over two floors. The collections comprise artefacts, mosaics, carpets, ceramics and sculptures.

This new wing is open every day except Tuesday, from 9 am to 6 pm, with late night opening on Wednesday and Friday until 9:45 pm. 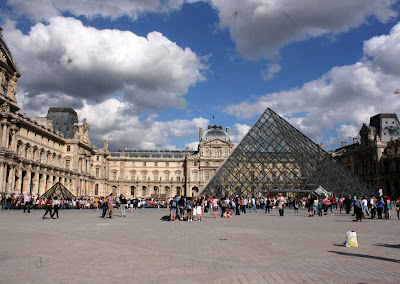 If you have been a follower of my blog, you’re probably wondering where I disappeared. Well, after having spent a chunk of my savings on a two-month trip to USA earlier this year, I got back into the saddle and took up a job, so as to collect the funds to be able to travel once again. Sometimes it almost feels like I make a living just to travel even though I like what I do, resulting in what is now a continuous cycle; like means to an end. And just like Phoebe once said on Friends “There’s dancing in my head”, for me, “There’s travelling in my head”. Okay, dancing is in there too. More like a mix, like doing the flamenco in Spain or belly dancing in Turkey. However, armchair travel isn't good enough for me. I need the real thing. That feeling of complete liberation; that urge of doing something stupid and yet relishing every moment of it.

So, even though I haven’t written a post in a while, I’m constantly thinking of where to head to next. And the list is endless. There’s Iceland to see the glaciers, Sweden for the Ice Hotel, and, of course, the northern lights, Cappadocia in Turkey to see the fairy chimneys, Spain to do the flamenco and salsa (both of which I've only managed to learn the first levels of), Germany for the Christmas markets, and many, many more. But for now, I have to satiate my appetite with the hope of getting time off to escape into my travel fantasy. However, you on the other hand can look forward to many posts to come, updating you on the goings-on of the travel world. From news updates to travelogues, there is a lot to come.

Until then, à bientôt

Posted by Ruchika Vyas at 21:45 No comments: