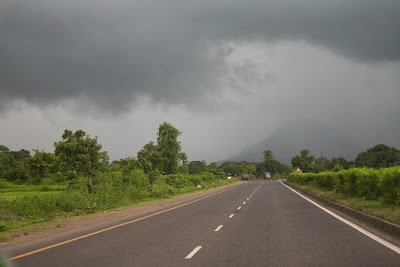 My earliest memory of a road trip is of being packed into a Maruti van with my cousins singing along to popular Bollywood numbers, whilst eating chips and drinking Rasna. It was a fun time; our group was large and loud; the roads were bumpy; and the stopovers were many. We even did a few road trips in those mid-sized tempos and Swaraj Mazda buses sometimes. As an adult, the meaning of road trips changed a little. Family turned into friends, the music changed from Bollywood dance beats to slower tunes by the likes of Coldplay and Jack Johnson. But one thing never changed. The joy of riding on endless roads. The changing scenery as we cross state lines, the often hilarious sign boards, and the camaraderie of good company. 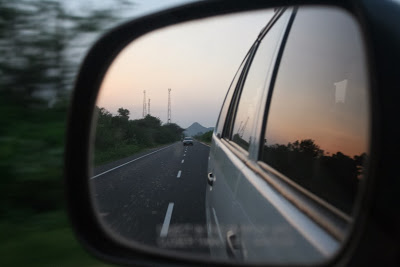 One of my most memorable road trips was the Mumbai-Delhi-Mumbai route. I had never imagined getting to Delhi via road, it turned out amazing. We had stopped over at Udaipur, Pushkar, Ajmer and Vadodara on the way; exploring the cities. We even saw a donkey run nervously across the highway road. The trip was an unexpected surprise. The other road trip that I will never forget is one I did from Srinagar to Leh and onwards to Manali. The dramatic changes in scenery that went from arid desert to snow-covered mountains, the kind people we met, the ramshackle tea stalls with piping hot Maggi-it was truly a journey to remember. 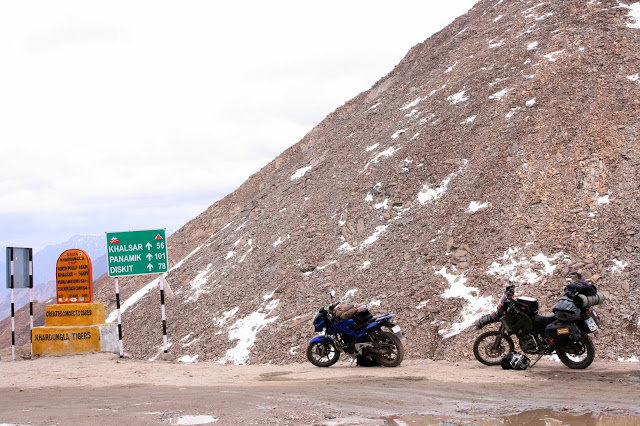 But many people I know have yet to embark on a journey that leads to the open road. Some have reservations because they don’t know where to begin their planning or how to effectively plan their trip. That’s where Go Road Trip comes in. I found this useful tool that helps people plan in detail and customise a road trip of their choice. From selecting the route to figuring out what kind of attractions you want to see on the way (be it heritage, beaches, wildlife or more), the timings of your chosen attractions so that you don’t end up there when it's closed, good restaurants on the way, how many kilometres are to be covered and many more minor details. There are around 75,000 road trip itineraries generated by over 27,000 users To choose from. Once you’ve customised your trip, you can download it and hope in your car! 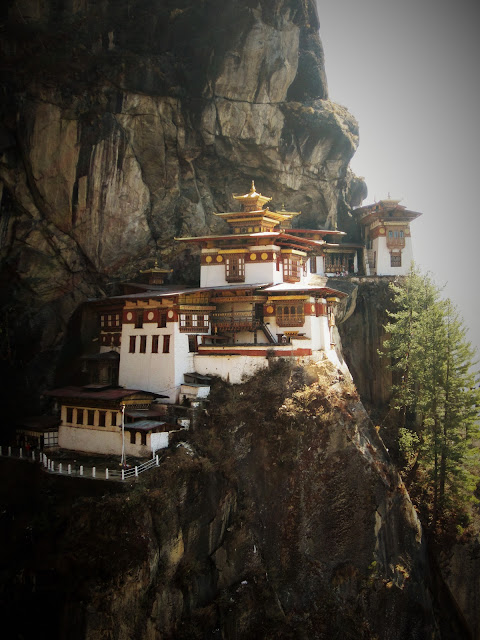 The night before I was to trek up to the Tiger’s Nest monastery in Paro (also called Taktsang Lhakhang), we were out celebrating my friend's birthday at an underground club. Dancing has always been our favourite kind of fun activity. Trekking on the other hand is something none of us would put in the same sentence with 'fun'. But we wanted to conquer this feat even with our dismal fitness levels (read: considers walking to the kitchen as exercise) as a self-enforced challenge. The next morning, we were up at 5am excited and brimming with a can-do attitude. As expected; it was short-lived. 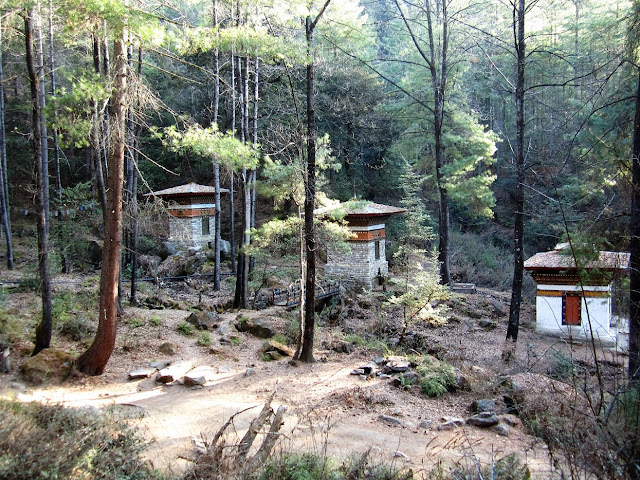 We reached the floor of the valley and looked up to see how far up the monastery was located. You see that white speck atop the mountain in the photo below? That’s Tiger's Nest. 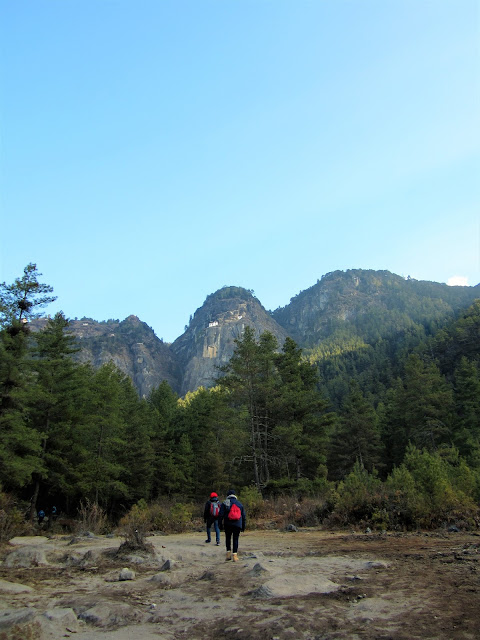 Now you understand why Guru Rinpoche (Padmasambhava)—the Indian saint who came to Bhutan in 8th Century AD—flew into this cave on the back of a tigress to subdue the evil spirits that tormented the residents living in the vicinity. Yes, tigress. Unfortunately, we couldn't get a tigress to ride on, so we settled on using our feet instead. There are horses that carry people half way up, but it seemed scarier to be atop a horse that missed a step (or simply sneezed), and fall off the edge of a mountain than relying on our feet. So we set out to reach this monastery perched impossibly at the edge of a cliff overlooking Paro Valley at the dizzying height of 3,000 feet. All we had were two layers of woollens (since it was almost -6 degrees), and basic essentials such as water, Gatorade and an energy bar in a tiny bag strung along. We didn’t know we had forgotten something extremely crucial to this trek, but I’ll get to that later. 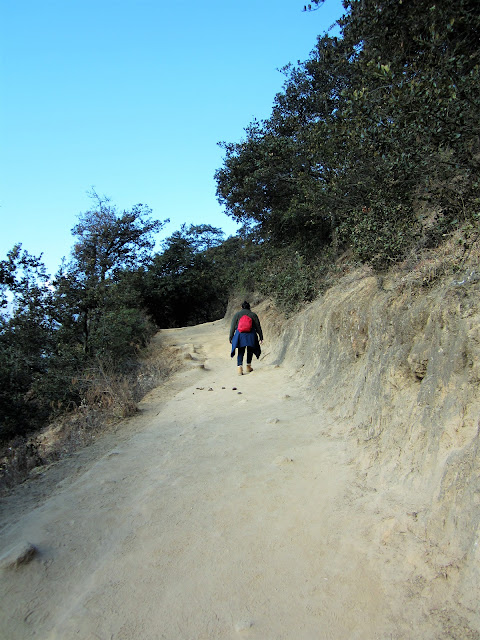 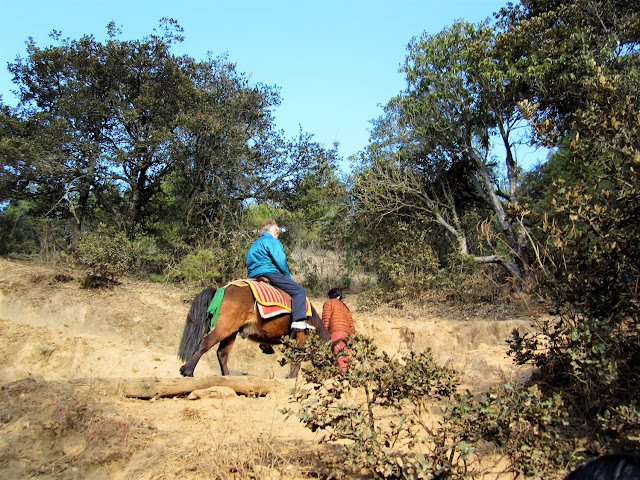 As we climbed uphill, the road was fairly wide, which brought an unexpected relief. We got more comfortable after the first half hour. The sun began to rise and the views became more and more beautiful. Soon, the unpaved road started to narrow a bit. The immense drop below wasn’t very comforting either. The increase in altitude as we continued uphill left us breathless quite often, slowing our pace. And it became hotter as we ascended. Suddenly wearing three layers felt more a burden than a necessity. I huffed and puffed (less comically than it sounds) most of the trek up; all the while watching smiling Bhutanese walking past me as if they were strolling in a garden. They were not only fit, they also appeared to be mentally tough having experienced the extreme weather and altitude change a lot more than us tourists. I had also heard a story about a man who completed the trek on his stomach. But all I could think of was "please god, give me a magic flying carpet or a tigress I can fly to the monastery on". #FitnessGoals be damned. 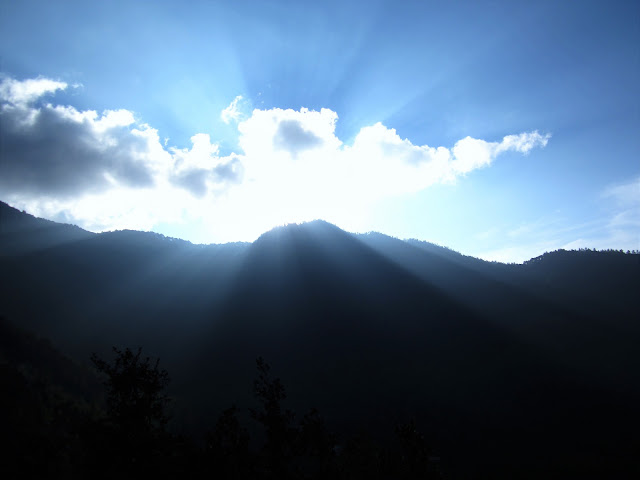 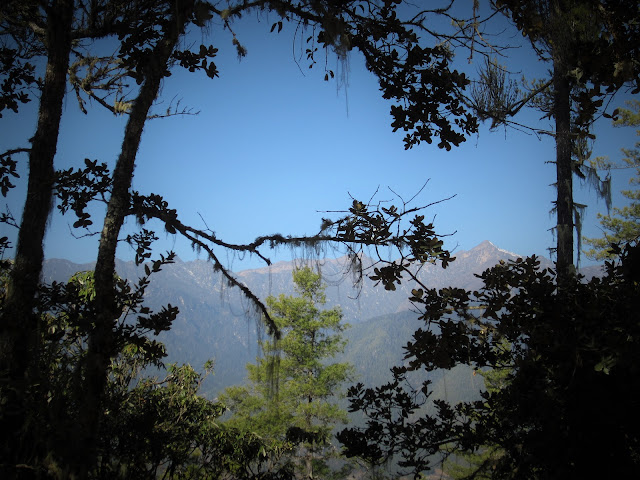 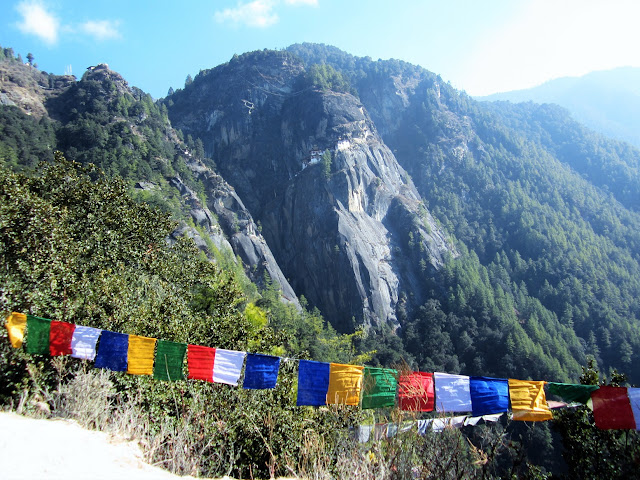 At almost every bend, we found boards with messages encouraging cleanliness and even dustbins for people to throw away their waste. I really appreciated how much effort the Bhutanese make towards this. 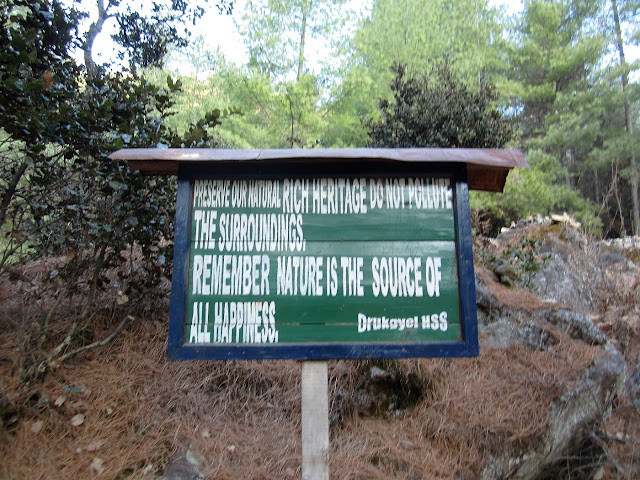 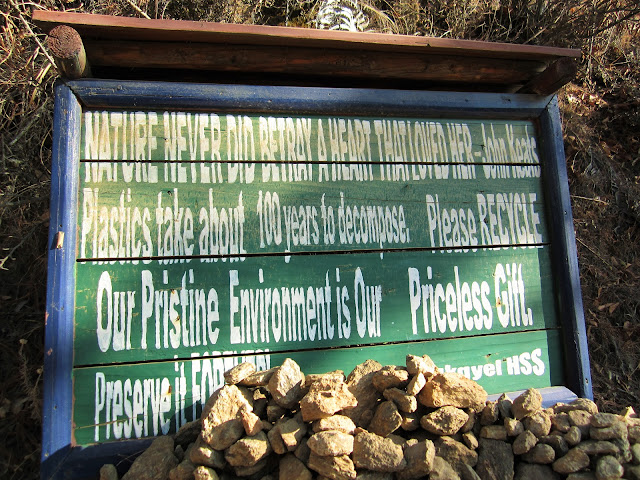 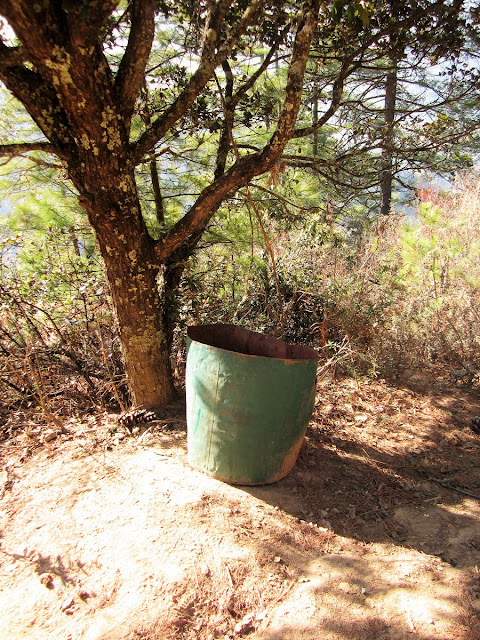 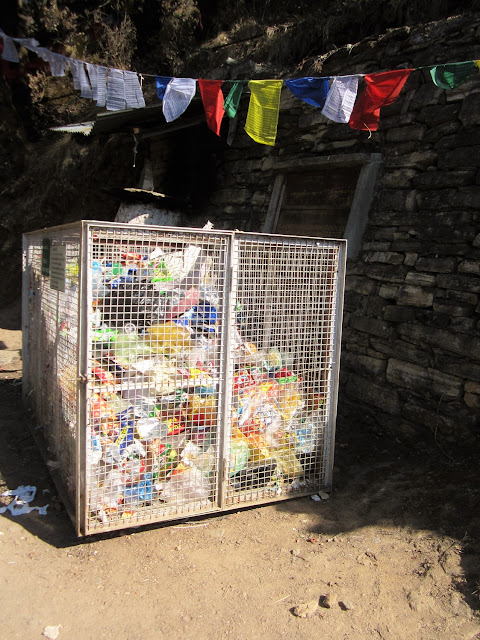 A few minutes later, I heard the thumping of horses’ hooves. I had seen them carry several trekkers uphill, so it wasn’t entirely odd. But then, something frightening happened. The horses it seems were let loose by their caretakers and they came charging down at us. I shrieked not only because I didn’t see them running at me, but also because there was no place to take cover! I was literally hugging a craggy mountainside, since the alternative was falling off of it. I composed myself after almost six or seven horses ran by. It was shit scary.


We kept going for another hour, passing several prayer flags fluttering in the wind, till we reached what seemed like our destination. With a feeling of excessive relief, we walked a few steps ahead only to see the monastery STILL at a distance; hanging at the edge of a flat vertical black granite cliff. Pushing through the few ounces of energy we had left, we walked ahead to find a long row of steps with a slim railing erected to prevent us from falling deep into the ravine that lay below. After 15 minutes, which felt like eternity, we finally made it to the entrance of the monastery. 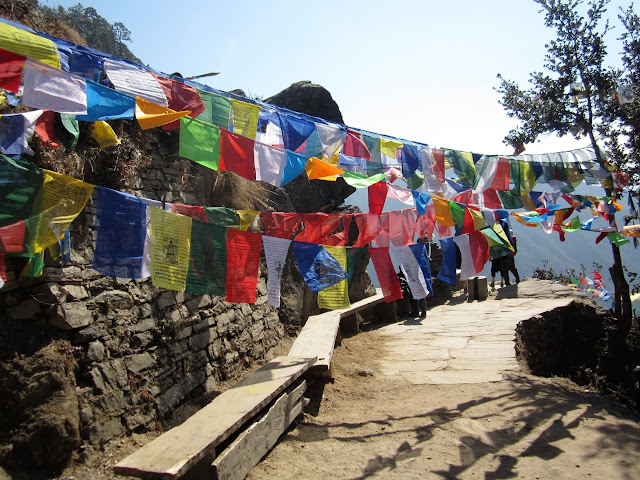 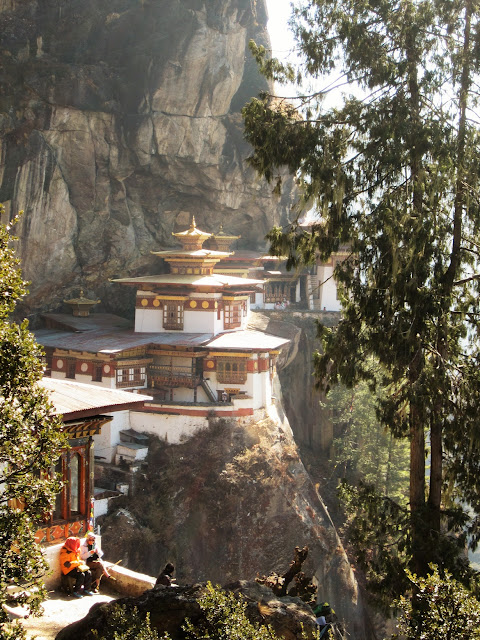 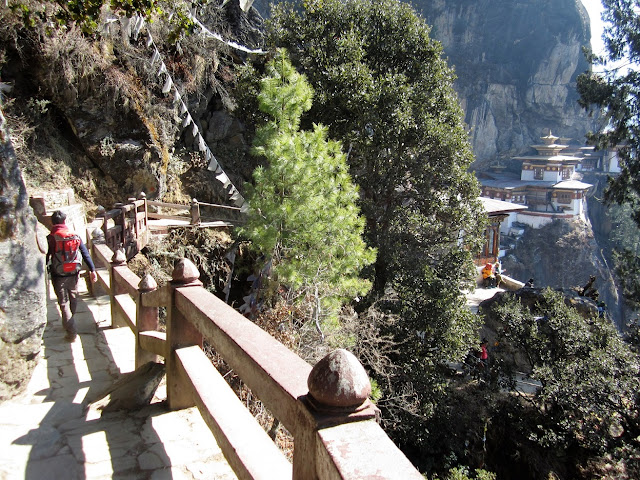 We were asked for the one thing we didn’t know we needed (remember that thing we forgot to pack?): the permit to Bhutan. You could almost hear glass shattering under our feet realising we completed an incredibly arduous trek, and saved our lives from horses running amok only to not be allowed to step into this revered Bhutanese monastery. In that moment, our plea was possibly heard by the looming gods surrounding us as my friend removed a copy of our permits she had packed with her just in case we needed it. We were indeed blessed. 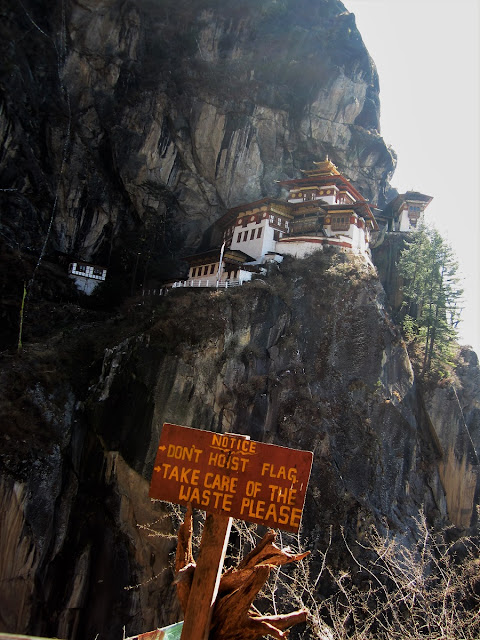 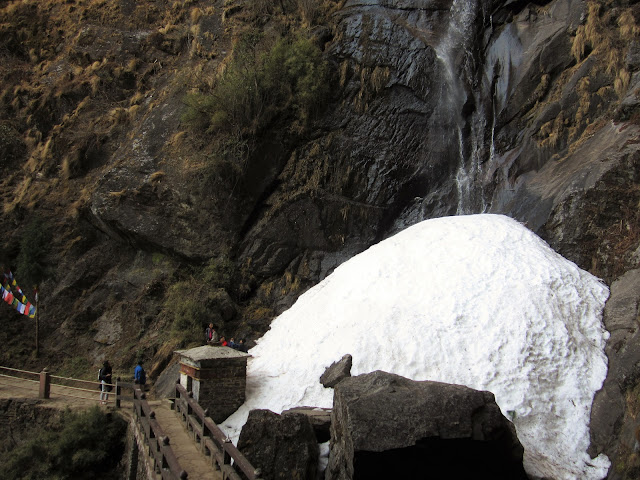 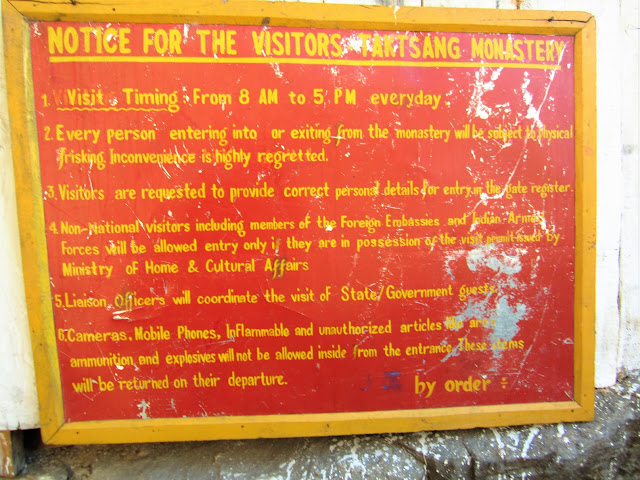 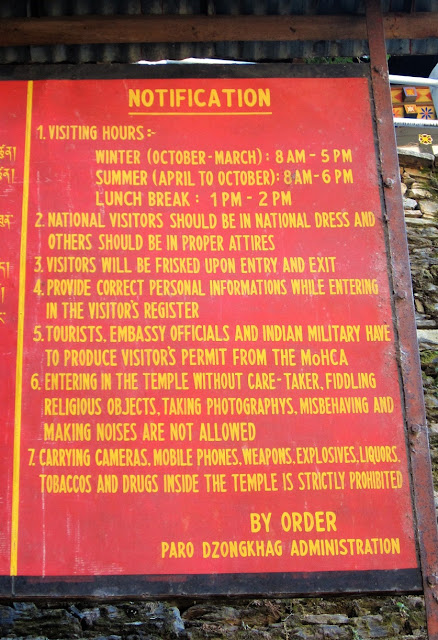 You may also want to read: Why a visit to the happiest country will make you unhappy